Since it’s the season, I figured I’d dig up an old body or two; specifically, a little essay I did on Universal’s 1939 picture, Son of Frankenstein for the Frankensteinia-headed Boris Karloff Blogathon several years back, on my old site. If you enjoy it, let me know in the comments and I’ll see about doing a few more horror film essays before Halloween.

I chose Son of… for the simple fact that when most folks talk about Karloff’s turn at the bolts, they focus (and rightly) on James Whale’s initial two contributions–Frankenstein (1931) and Bride of Frankenstein (1935). But, I’m of the opinion that this does a great disservice to both Karloff and the work into creating the creature we came to know and love.

The black shadows of the past bred this half-man . . . half-demon! . . . Creating a new and terrible juggernaut of destruction! 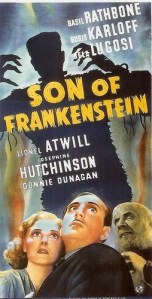 With Son of Frankenstein, you have something approaching a reboot of sorts. The previous two films took place ostensibly in the late 1880s, early 1890s, while this, the third, takes place in an analogous period to Dracula, The Wolfman, and The Mummy, i.e. the Twenties-Thirties, bringing the Monster in-house, as it were.

Besides Karloff’s nuanced performance as the Monster-as-Adult, we have the Monster-as-Family-Curse…a burden to Henry Frankenstein’s descendants, the sins of the father heaped upon the sons, the cousins, the daughters, the nieces and the nephews.

It’s an interesting plot point and one which is unfortunately discarded by the time of House of Frankenstein (in which Karloff returns as a vengeance-driven scientist who could easily have been a Frankenstein but is instead a No-One.).

It’s this point I want to talk about a bit. There’s a lot of grumbling about this film and about Karloff’s performance in it. Mainly, I think, because it’s a step in a darker direction for the Monster, something that doesn’t sit well with many people. The fact is, Karloff engendered a lot of goodwill for the creature in his first two outings-he built the beast up as a sympathetic character, a child of misfortune, driven into the wilderness and savagery by a hateful world, through his performance. Equal credit is certainly due to the director of the first two films, James Whale, but since it was, at heart, Karloff’s pleading portrayal that cemented our idea of the Monster as a lonely child, that’s what I’m going with here.

But, when we get to this film, Karloff burns through his karma points from the first two in short order. And it’s jarring. It’s like watching a beloved pet suddenly turn vicious. Which, I like to think, was the point.

The Monster has learned, you see. Once poor, misguided Wolf Frankenstein juices him back up to full strength, healing his ravaged flesh and rendering him capable once more of movement, the Monster goes into action. And it is action. For the first time, Karloff’s creature is not simply reacting. He’s acting out, ostensibly following the directives of the loathsome Ygor, but, in reality it’s obvious that he’s no small-brained brute and that he’s deriving an immense satisfaction from wringing the necks of his victims.

What’s striking is that the Monster has no particular victims in mind. He kills the ones Ygor points out because, to the creature, it’s quite obvious that the only good human is a dead human. He’s learned that none of them are to be trusted, especially a Frankenstein, and he acts accordingly, killing them as one would vermin. The individuals don’t matter. They are simply wet, red playthings for a creature that has, at last, transcended its former handicaps.

Karloff, with this film, gives us the Monster in full flower. A fallen angel. Something that could have been beautiful, kind, wonderful, is instead at last become ugly, hateful and terrible in its rage. It shakes the foundations of Heaven, Grendel ravaging Herot, not out of hunger, but out of hate. The Monster does not kill because it is driven to, but because it desires the death of all that is not itself.

Even the psychopathic Ygor displays some trepidation at its savagery, soothing it with his music from a safe distance. Lugosi makes it very clear in his performance that he does not control the Monster, but is, instead, merely influencing it. For him, the Monster is a tool that could very easily turn on its wielder. And it soon does, choosing its own path when Ygor meets his (temporary) fate.

The Monster at last comes for Frankenstein, stealing his child, in order to punish via proxy, an act which displays the true depth of the rot that has overtaken the creature’s once innocent soul. But like Milton’s Lucifer, Karloff’s Monster is sent spinning to Hell by his creator (or his creator’s son, rather–shades of Lucifer’s defeat by the Archangel Michael), his rage at last abated by defeat.

By the next film, the Monster, bereft of Karloff’s animating spirit, is burnt-out husk. Bled white, its fiendish intellect replaced by dull clumsiness, and eventually, blindness. It’s to Lugosi’s credit that with Frankenstein Meets the Wolfman, he gives us a glimpse of that old infernal drive at the climax, but it’s not the same. Lugosi’s Monster is not Karloff’s. The brain, the soul is different.

Instead of a terrible angel of science, it is just another beast of low lusts, fodder for the arena. A sad fate for any monster.

5 thoughts on “‘A New and Terrible Juggernaut of Destruction…’”